A DAIRY FARMER’S PERSPECTIVE – FARMING THROUGH THE COVID-19 CRISIS 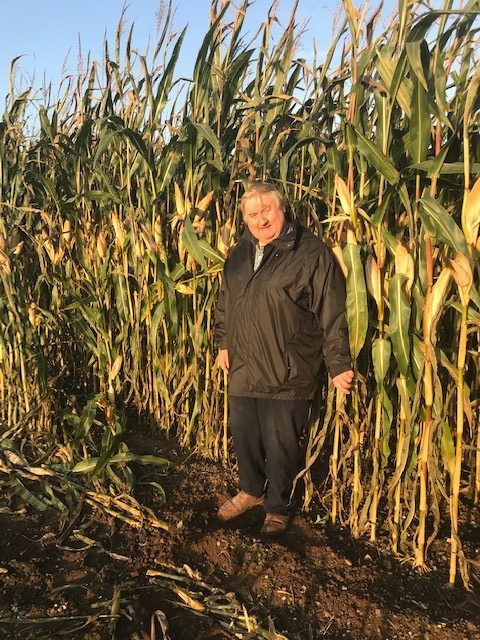 Farm Zone speaks to dairy farmer and kennel owner John Bayley, to find out how the agricultural economy is faring during the coronavirus crisis.

John Bayley – together with his son Richard – has just taken succession of the tenancy of the 600-acre Castle Farm. The main enterprise is dairy, but he also grows wheat and has a kennels and a shoot. John has 320 cows, each yielding approximately 10,300 litres a year. He also has dairy heifers and 150 Belgian Blue calves. He takes between three and four cuts of grass silage a year, and the typical forage mixture fed to the cows is grass and maize. He always grows 200 acres of wheat, but in the next five years he plans to concentrate much more on the dairy farming side. He established the dog kennels in 2005. It is very much a seasonal business, getting very busy in summer, when they can take up to 60 dogs. His wife Christine and daughter Caroline run the kennels, which is separated from the main farm. The shoot offers 10 traditional farmer days, and he puts down up to 2,500 pheasants and 600 mallards. They also attract a large amount of wild teal on the two lakes on the farm.

FZ: How is the Coronavirus pandemic affecting your business operations in the short term? How are you managing from day to day? Have you had to change the way you work?

JB: Sadly, we have had to close the kennels to the general public. We are open to house dogs for key workers who are finding it difficult to look after their pets, but otherwise it is shut down for the time being, and we have put both staff on furlough. We have received a grant from the council to support the business, but it will only see us through one month. I don’t think there’s going to be a lot of travelling for this year. We have also shut down the shoot, for obvious reasons. Emma, my other daughter, is the science teacher at John Cleveland College in Hinckley and she has been laid off too.

Farmers are lucky in that we work outside in relative isolation, so there’s no being stuck in the house in self-isolation for us. With regards to our dairy farming operations, I have to say we have been fortunate. We sell our milk to Muller, who are a great company to be with, though they have told us to cut milk production by 3%. That said, they have actually recruited 300 extra staff for their milk operation, to cope with increased demand for dairy products from the public during lockdown. Almost all of our milk ends up on supermarket shelves. I have to say, though, that we have been lucky. Many other dairy farmers have lost all their markets.

FZ: What do you think the long-run impacts of coronavirus will be for dairy farming? Will there perhaps be increased demand for local dairy products, such as cheese?

JB: I think it will focus people’s minds on food, without a doubt. People across the country are definitely turning more to local produce, but I suspect supermarkets will remain the dominant suppliers. Here at Castle Farm, I’m sure we will survive the crisis, but I fear there are a lot of farms which won’t. It could push many farmers into early retirement.

FZ: What would you like to see the government do to help farmers through this crisis?

JB: I can’t say the government is giving farming a great deal of extra support at the moment. And many farmers have been hit hard. Even James Dyson says his farming operation wouldn’t survive without the single farm payment. On top of this, we are committed to leaving the EU. Feed that comes from abroad – protein ingredients, such as soya – is all likely to be more expensive. The government is going to have to support agriculture through this.

FZ: Has farming been in a similar situation to this in the past?

JB: I can’t remember another year like this one. We’ve not been able to do any autumn work at all. Back in January, we combined and crimped some of the maize forage. Then we combined some more in April. Then we lost 10 acres altogether.

The Foot and Mouth and BSE outbreaks were very traumatic for farmers. We saw the value of our stock plummet, mass slaughter of farm animals, and everybody stopped eating beef. But obviously this pandemic is different, as it is hitting all sectors of society, and all our supply chains, though I think it’s hitting other businesses harder. We can still get parts for machinery, for example, and, as I said earlier, we can get out on the land and work. Some people compare the current situation to the war, but we aren’t being bombed!

We have to get the country back to work, though. The longer the lockdown goes on, the worse it will be for everybody, farmers included.

FZ: You say that you spend a lot of time working on your own, but farmers are a community. Have you managed to keep that community going?

JB: In a sense, yes. Nowadays we all connect on social media such as WhatsApp, as well as on email, but I do regret that we have had to cancel our farm competitions. I was chairman of Hinkley and Bosworth farm Competition for five years. It’s a real social event. A highpoint of the year. It gives us farmers a sense of togetherness, and a feeling that British agriculture is second to none, which it definitely is. I don’t think the show has ever cancelled before throughout the 70 years of its history (except for during foot & mouth). It will be good to get back to normal, and for those competitions to resume.