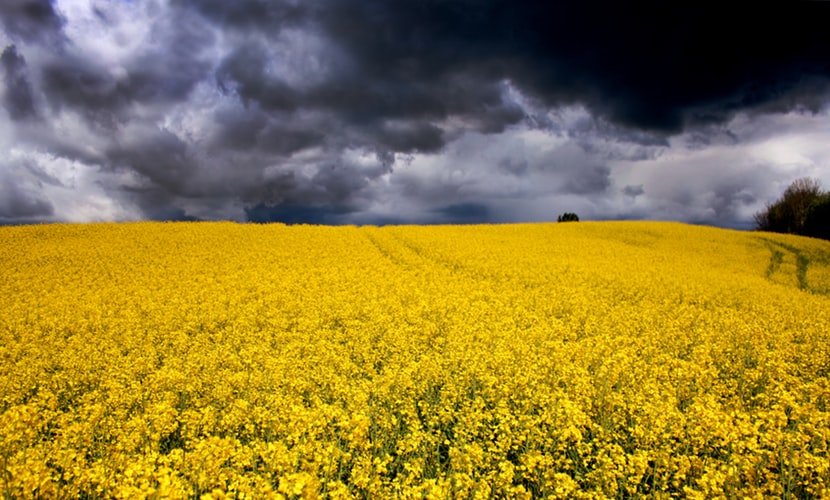 It has recently been reported that oilseed rape prices are set to rise in 2020. In this article, Farm Zone explores the reasons for the predicted price rises, and the likelihood that they will come to pass.

In the UK, the rapeseed crop is in decline. Last year, about 590,000ha was harvested, producing 1.9m tonnes; whereas this year the harvestable area is estimated to be 520,000ha which will result in 1.75m tonnes. Some indications show that for the 2020 harvest, the UK oilseed rape area could be down further – maybe by as much as 15%. A number of farmers report that they will turn their backs on oilseed rape entirely due to flea beetle and difficulties establishing the crop.

One long-term reason for the decline in the UK oilseed rape crop has been the banning of neonicotinoids or neonic seed dressings. When neonics were first banned in 2014, production was at 2.54m tonnes. And production declines are being further compounded this year by the rising threat of oilseed rape phoma developing early this year, due to the rainy yet mild weather.

The good news is that UK rapeseed yields are not in decline, with an average of 3.3t/ha. With much domestic demand for rapemeal being for the non-GM varieties, demand for UK and EU-grown product is being pushed higher still.

In Europe, the harvest will be poor, and is predicted to be about 17.1m tonnes. If this prediction comes to pass, it is going to mean that EU countries will need to import an additional 5m tonnes from the Ukraine, Canada and Australia. This creates further problems for UK processors as Canadian and Australian crops are often GM.

While non-European supplies are one potential solution to the European shortage problem, tough EU regulations surrounding GM create a number of problems. Two problems in particular stand out. The first is that many UK crusher plants are unable to manage a GM supply while guaranteeing that they are not contaminating the non-GM crops. The second reason is that the UK domestic demand for GM rapeseed products is very limited, and so the resultant processed product must then often be re-exported.

The China-US trade war will have an impact on rapeseed prices, with price rises expected if the US and China are able to make progress toward sorting out their differences. Oil prices also impact rapeseed prices, because rapeseed is used to produce biodiesel. Essentially, this means that rapeseed prices are heavily impacted by geopolitical tensions in the Middle East – which do not look set to ease any time soon.

Finally, rapeseed has a possible bright future as a growing source of human protein. This is because as the vegetarian movement continues to grow, start-up meat companies are looking for alternative options to soy. One Polish company, NapiFeryn BioTech, recently reported that it is developing a ground breaking new technique to extract the protein from oilseed rape for human use (something that up to now has been impossible). The Polish company claims that it will end soy’s dominance of the plant-based protein market. If they are correct, the future for oilseed rape may be bright.

Additionally, a recent report in the Farmer’s Guardian says that some UK farmers are moving away from cereals and into oilseed rape as part of their Brexit preparations, because the tariffs on cereals are so high. Though the extent of this trend is not yet clear, it does seem possible that a hard Brexit could cause a moderate increase in the UK oilseed rape crop.

Yet, despite all the challenges, farmers should still consider the longer-term prospects of oilseed rape. Not only are global prices growing, but weakening sterling will support UK prices in particular, and there are few analysts suggesting that sterling will do anything other than continue to weaken as the Brexit crisis rolls on into upcoming trade negotiations. Meanwhile, seed production companies, such as Mas Seeds, one of Europe’s leading seed production companies, are providing possible solutions to problems such as flea beetle and the banning of neonics. Mas is recognised for its leading expertise in oil crops and invests a significant proportion of its annual turnover into research and development. On average, every year the company’s high-tech biomolecular laboratory and five selection centres will register more than 30 new seed varieties with high genetic potential.