THE SCIENCE BEHIND SILAGE INOCULATION AND ANAEROBIC DIGESTION: AN INTERVIEW WITH DR JOHN LEAR 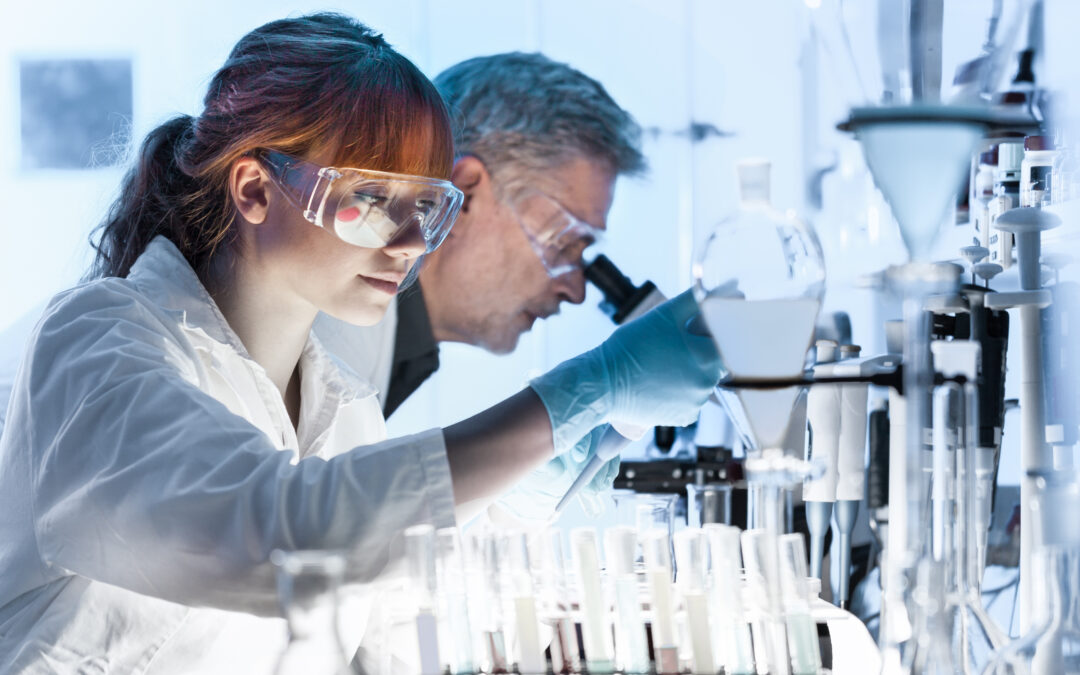 Working with our partners to deliver products that lead the field is a fundamental principle of Bright Maize; here we look at the science behind the Biogas Max inoculant range for anaerobic digestion, and talk to the lead researcher.

The very characteristics that give crops like maize and rye their nutritional value – such as high levels of sugar, protein and fat – also mean that, as a feedstock, these crops can deliver a methane yield far higher than that obtainable from waste material.

The efficient preservation in silage of that nutritional value is thus no less important for AD crops than it is for animal feed.

The application of a silage inoculant plays a key role in this process. Available to the farmer in powdered form, these treatments are simply mixed with water and applied to the crop before it goes into the silage clamp.

But then what happens? What does a silage inoculant actually do? How do these bacterial additives help keep silage in good condition; and how do those specifically tailored to AD crops contribute towards a higher methane yield?

To get the scientific low-down, we spoke to Dr John Lear, technical director at Biological Preparations, Ltd., who is behind Bright Maize’s exclusive Biogas Max product – a specialised inoculant for maize and other silage destined for AD.

What, in a nutshell, does a specialised inoculant such as Biogas Max do?

It basically prepares the silage so that it has the optimum nutritional profile and stability for anaerobic digestion. It helps you produce the very best silage you can for AD so that you get the most methane out – and as quickly as possible.

What are the ingredients of the product? How is it manufactured?

Bacteria are fermented and then freeze-dried into powders. These are then blended, in the correct proportions, with free enzymes to kick-start the ensilage process, a carrier (usually a sugar-based carrier: sugar is quite convenient for carrying bacteria) and a few other processing aids. There’s a flow regulator to stop the product caking (going into lumps) and there’s a water scavenger, because another feature of powdered lactic acid bacteria is that they don’t like damp conditions – that really affects their stability.

Then the bacteria, enzymes, the carrier, the flow regulator and the water scavenger are blended together in a powder mixer. They need to be mixed so they’re homogenous, but treated with some care (they don’t like being beaten to death). The mixer provides a gentle tumbling motion and produces the homogenous product.

What kind of bacteria are used in the product?

We put both into the product because homofermenters are important for the silage’s optimum nutritional profile and the heterofermenters are – and it’s beyond doubt – absolutely essential for aerobic stability.

Once the silage is put into the clamp and the ensilage process begins, they are the bacteria that use up all the oxygen in the clamp, which is sealed. They produce lactic acid to give a rapid pH drop and that basically inhibits other organisms that might cause undesirable fermentation pathways and spoil the silage (things like Clostridium, coliforms, E. coli, Listeria, that kind of thing). So, very rapidly, you have this removal of oxygen, you have the rapid pH drop, and these undesirable organisms are inhibited and you are controlling the fermentation in the direction you want it to go.

And how do the heterofermenters provide aerobic stability?

Aerobic stability means stopping the product from heating and moulding once it is exposed to air.

Forages like maize, being quite high dry matter, are very susceptible to spoilage on exposure to the air. And as soon as they are exposed to air you get growth of yeasts and moulds which are present in the forage, and these yeasts and moulds will very rapidly produce heat, they will use up dry matter, they will use up energy, and they also produce toxins which are aren’t really conducive to good silage.

The studies are quite scary. One found a 4.5% loss in methane yield for maize silage produced under air stress conditions. And another study found that 17% of the methane potential was lost over seven days of air exposure after the silage was out of the silo. That’s a lot of methane to lose.

Heterofermenters prevent the growth of yeasts and moulds through the production of acetic acid (and a few other metabolites, but acetic acid is the important one). That is aerobic stability.

So homofermenters don’t provide enough aerobic stability on their own?

Not normally, no. They are responsible for keeping undesirable bacteria away in the early stages of fermentation and they do make it harder for yeasts and moulds to grow, but you must have the heterofermenters for the full aerobic stability effect.

Acetic acid is also massively beneficial to the AD process as a whole. So with heterofermenters you’re getting a double advantage.

What is the importance of acetic acid to the AD process?

The AD process is divided into four stages. We start with our substrate, which in this case is silage. First there is a hydrolysis step, where basic raw materials are converted into simpler sugars, amino acids and fatty acids. The next stage is called acidogenesis, where organic acids and alcohols are produced. Then we go to acetogenesis, which is where acetic acid is generated. And lastly we have methanogenesis, which is where that acetic acid is converted to methane or biogas (the difference between the two is that biogas is a mixture: largely methane with carbon dioxide and sometimes a couple of other bits and pieces as well).

So acetic acid is very important to the whole methane or biogas production process.

Not only is the acetic acid produced by our heterofermenters giving us the aerobic stability that we need, but it’s also highly advantageous to this process – because, basically, you’re jumping the hydrolysis, acidogenesis and acetogenesis steps. You’re going straight to acetic acid, which is directly convertible to methane or biogas. You’re speeding up that process, you’re getting a higher methane yield, you’re getting it more quickly.

So for that reason we’ve got a double whammy.

What is the name of the heterofermenter you use in Biogas Max?

There’s another Lactobacillus we’re investigating at the moment called Lactobacillus kefiri. It’s less well known, but it has a definite place in our products. We will see this in use for the 2021 season.

Are there any important differences between the strains of L. buchneri you mention?

Yes. All strains of L. buchneri are not the same.

Some point out that L. buchneri can cause increased dry matter losses in silage – because the heterofermentative pathway is not quite as efficient, if you like, as the homofermentative pathway, and you can get some dry matter loss. And that is certainly something you want to avoid in AD. One very important distinction of our L. buchneri is that it does not cause dry matter losses – in fact it can reduce them. That was stated in the EFSA [European Food Safety Authority] opinion when the strain was authorised.

Do you expect to see an increased use of this kind of silage inoculant over the years to come?

I hope so, yes. Because, really, it’s a no-brainer. We did some calculations of the financial benefits, and we thought it was about three times return on the cost of inoculant. There’s a definite benefit there.