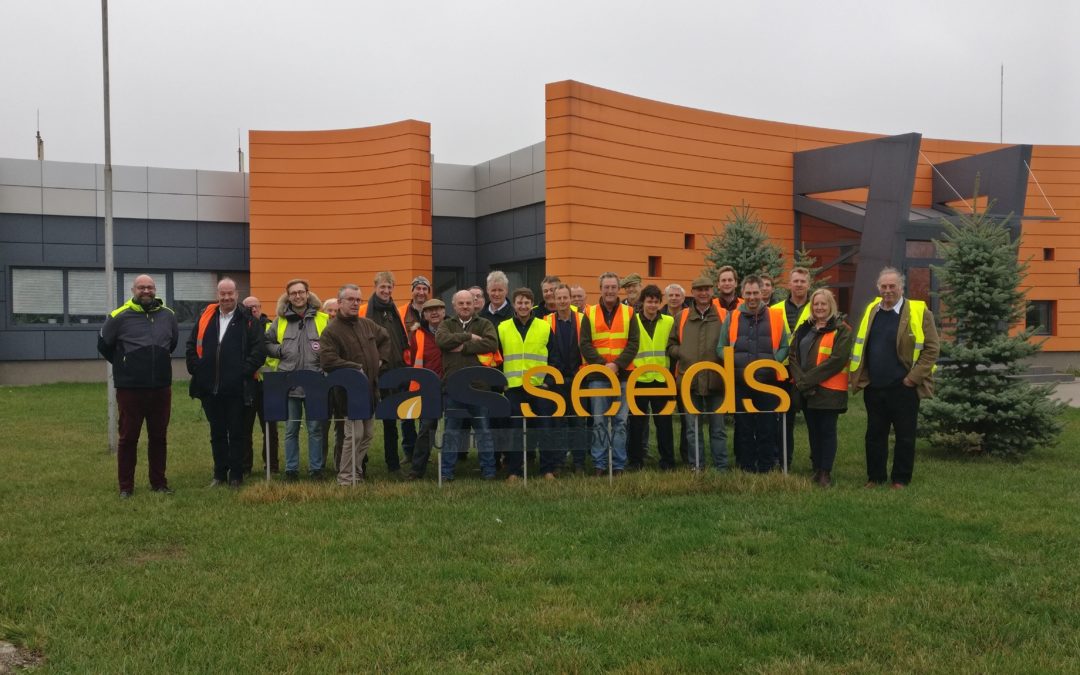 In a remote corner of Ukraine, a highly automated facility processes seed day and night

The Dnipropetrovsk Oblast region in central Ukraine is extremely remote. It boasts some of the most fertile agricultural land in the world – with wide expanses of deep, black soil. The region also hosts a large number of small subsistence farmers who survive on old fashioned manual practices.

In the middle of all this stands an ultra-modern processing plant that would not look out of place if it were in a high-tech industrial park in Germany, South Korea or Shenzhen. It belongs to Mas Seeds, a subsidiary of €1.3 billion French food and agribusiness cooperative Maïsadour. The plant in Ukraine uses the latest automation technology to process, dry and package high quality, genetically pure maize seed for the world’s farmers.

Mas Seeds recently took a party of customers from its UK distributor Bright Maize to look around the plant and see how maize seed is produced. The journey from the UK to the Dnipropetrovsk Oblast region is not an easy one – involving a plane to Kyev, an eight-hour sleeper train to the town of Dnipro and a two-hour bus ride – and it underlines just how remote this facility is. It has to be remote, because it has to be near the farms that will produce the seeds it will process. 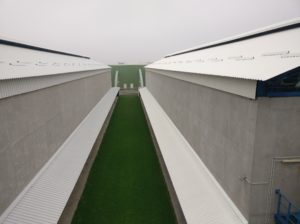 The Mas Seeds plant in Ukraine

“This place is state of the art” says Igor Vorontsov, Mas Seeds’ locally-based industrial manager. “The technology builds on everything Mas Seeds has learnt from years of manufacturing at its original facilities in France, but everything is much more modern as we only built the place about ten years’ ago.”

“What’s particularly exciting about this factory is that not only is the technology modern, but that we were able to build it from scratch. This meant that we were able to ask the engineer to build his dream layout for a seed processing plant. The result was that he put all the processes in a line – pursuing the most optimal and rational layout.” 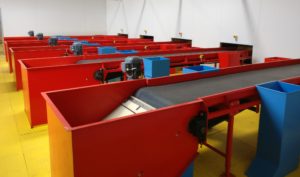 Mas Seeds asked the design engineer to build his dream factory layout – the result was a rationalised, highly efficient facility

All processes are as automated as possible. Corn enters the facility and then goes through sorting machines which remove sticks and other detritus, as well as any diseased cobs. Next all cobs enter one of two massive driers. Each drier has a capacity of 1,100 tonnes composed of 24 drying cells. Drying cells have four fans and a gas burner. Gas is used because it’s the easiest way to keep the same level temperature. And temperature is vital to the process. The driers are heated to 38˚ precisely. Any lower and the process takes too long, delaying production elsewhere in the facility. Any higher and it causes real risk because if the temperature is over 40˚ the seed will die. The target is a final humidity of 12%, which is a big challenge. Periodic humidity checks – sometimes hourly checks – are needed to achieve it. Even once the seed is fully dried, no chances are taken. The drying cells are then isolated and kept for three hours more. Then samples are taken again. Once the dried seed is approved it is decanted into hoppers and shipped for packaging. 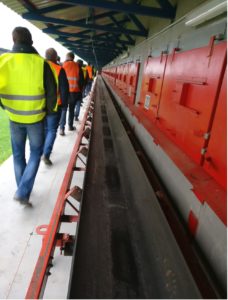 Once the dried seed is approved it is decanted into hoppers which run along this black conveyor, and then transported to the packaging part of the line

At the packaging stage, seed bagging and palletizing is fully automated. Seed is loaded into large hoppers and poured into bags on a moving production line. Bags are then transported on a conveyor and loaded onto pallets via robot, then sent for immediate shipping to distributors. A total of 1,000,000 bags a year are packaged at Mas Seeds’ Ukrainian facility, of which 50% is maize seed, and the other 50% is sunflower seed and oilseed rape. An eight-hour shift will pack 150 pallets and, when busy, the factory runs 16 hours a day.

Product quality at the Mas Seeds plant is second to none. Samples are taken to monitor consistency across a variety of factors including sizing, germination and humidity. Additionally, genetic purity tests are conducted on samples which are sent to France for that purpose. Manufacturing traceability is also very high and extensive records are kept to ensure complete traceability.

Mas Seeds Ukraine don’t own land. Instead, they have a growers’ network consisting of contracts with 30-40 farmers who supply all the Ukrainian plant’s needs.

“We train them and give them our technology. And we make sure to always look after them”, says Igor. “We have invested heavily in irrigation for them. And we handle the harvesting process ourselves using our own machinery. Usually, corn is harvested at night to have the seed ready at the factory first thing in the morning. We also pride ourselves on sustainability. For example, when we strip the leaves off the cob, we press them into containers and sell them to farmers as animal feed.”

Being sited in a remote rural area, the Mas Seeds plant is one of very few local employers, and yet finding labour, especially seasonal labour, is always a problem because local workers tend to opt for contracts in countries like Poland or the Czech Republic. 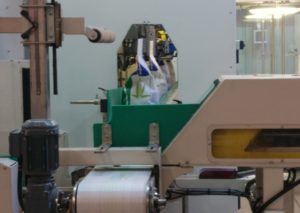 The factory packages and palletizes 1,000,000 bags of seed a year

“We have 25 permanent production staff” continues Igor. “And every year we need to find 200 seasonal workers. We aim to hire the same people every year, and for that reason, we try to be the best employer we can be. We are very focused on safety and we give extensive training in this regard. The work here is simple and easily learned, but the machines are dangerous, so for us, safety is the key. We pay well by local standards, and we do what we can to help our workers in other ways.”

“For example, we keep the central part of all the cobs once the seed has been stripped off, and sell it to our workers. We do this because burning cobs is a way that people in the countryside can get cheap heating – it’s much cheaper for them than buying gas. For them this is a real bonus as it can get pretty cold round here – in winter, it can get as bad as minus 30.”