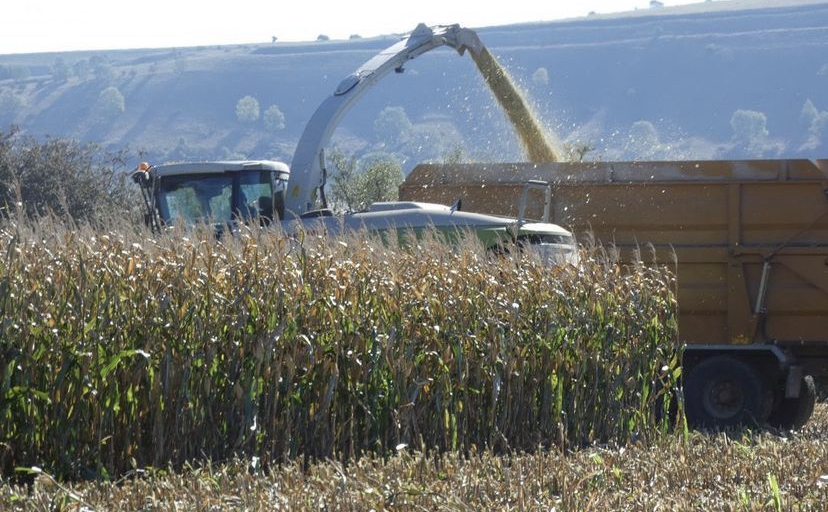 The third and final installment in our series Maize Growing: the Core Skills looks at the principles behind harvesting the crop for silage. Having cultivated the healthiest possible yield, you will now want to turn that into the best possible end product.

When to harvest? It’s a crucial question – to which there is a definitive answer: when the maize is at 32-35% dry matter.

Maize plants ready for harvesting will have dry husks, two to three green leaves under the ear and the so-called ‘milk line’ (which moves down the grain as the milky moisture content shrinks) will be visible about half way down the grain.

It’s also possible to work out dry matter content by simply weighing samples before and after drying them out thoroughly in the oven.

Weather conditions at harvesting should obviously be dry – not just to protect the crop’s dry matter content but to minimise contamination by soil, which contains harmful organisms.

Cleanliness of equipment and of environment becomes, from this point on, an important issue.

Cutting height should be a balancing act: low enough to maximise yield while high enough to avoid contamination by soil and weeds. 15cm is often high enough.

Chop size depends on what the maize is for: it can be shorter when making silage for AD plants than when making it for fodder. However, even in the latter case, though the strands need to be long enough to be chewed, too long and animals may refuse them (as well as the particles not settling as well in the clamp). The chop size should therefore not exceed 2cm and an ideal of 1-1.5cm may be recommended.

The maturing maize grains will be broken up by the grain crushers on most silage harvesters, a job that becomes more important as the 35% dry matter mark approaches and the starch in the grain gets harder and glassier.

Another balancing act: work quickly in order to minimise aerobic spoilage, but not so quickly that care taken over constructing and compacting the silage is compromised. This challenge often simply means synchronising the work of those filling the clamp with the work of those compacting it.

Keeping air out is the key principle. To seal out oxygen is in practice to seal out undesirable spoilage organisms; it’s the difference between fermentation (which actually improves the digestibility and starch content of the maize over time) and simple decay.

Strive, therefore, not to leave any air pockets as you carefully fill the clamp layer by layer. Optimal compaction can be achieved by not making the layers too thick (15cm is recommended) and by ensuring that the tyre pressure of the tractor rolling over the silage is not too low (i.e. not below road pressure).

Polythene sheeting around the clamp, enhanced by weights, should then be used to create an airtight seal.

Once the silage begins to be used it should be as little exposed as possible. The size of the front opening should be small enough to be moved across in its entirety at least once a week. And continue to guard against contamination from dirt by keeping the surrounding area clean.

The nutritional profile of silage varies every year: it is a natural product that reflects variable growing conditions. It is therefore necessary to take samples for testing. The resulting analysis – of everything from crude fibre to nitrogenous matter percentages – will help you put the silage to best possible use when it comes to formulating rations.