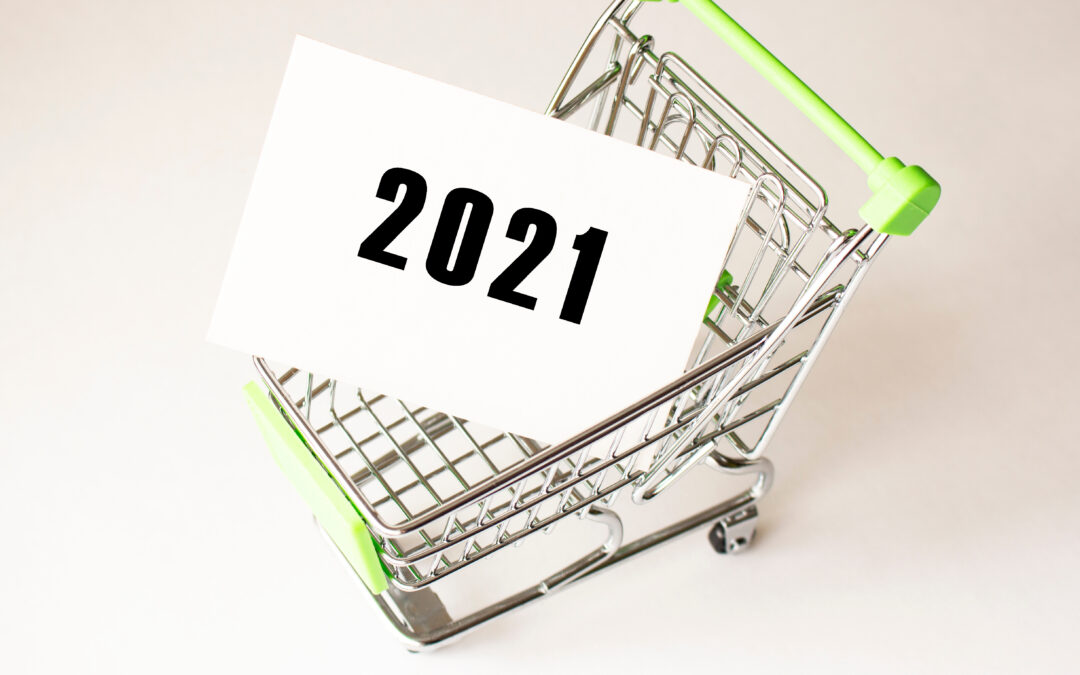 Food retailing trends are highly relevant to maize growers, over 90% of whom are milk producers, because changes in consumer buying habits of dairy products will influence the terms of the contracts on which they sell their milk. For this latest blog, Farm Zone, Bright Maize’s in-house blog, takes a look at household food spending trends for 2021.

From the death of the department store to the take-off of the takeaway, the consumer trends of 2020 have been much discussed. But what’s the narrative now and which are the trends to watch out for this year?

According to Professor Martin Hingley of the Lincoln International Business School, lockdowns will continue to foment new buying behaviours; while, amid some long-term uncertainties for the food industry, there may be glimpsed the potential for positive new beginnings.

Especially until Easter, COVID-19 will continue to hold its influence over the new shape of household spending. The big out-of-home spends – not just on eating out but on everything from weddings to holidays – are curbed by social restrictions, and as such the proportion of income dedicated to food purchased for home consumption, and food retailers, stand to benefit.

On the other hand, concerns over job security, as well as the effects of redundancies in the hospitality and other service industries, may be expected to impact total spending levels in many households.

Basic groceries will continue to sell well but so too will luxuries and indulgence goods. Market researchers Kantar recorded December 2020 as the grocery sector’s busiest ever month. Marked increases in the sales of non-essentials such as desserts and alcohol, though, reflect not just preparations for Christmas but a recentring of all recreational experiences on the home.

Renewed interest in home-cooking will continue as one aspect of the bias towards home-centred spending. At the same time, indications are that this is likely to be balanced by newfound levels of reliance on convenience and value-added foods.

The online sale and home delivery of groceries has already established itself as a new consumer norm, one of many online behaviours trending long-term. Asda’s pre-Christmas expansion of its partnership with Uber, and Marks and Spencer’s collaboration with Ocado, launched in September, exemplify important new relationships capitalising on the trend.

Growing consumer demand is both met by and reinforced by investments in technology and logistical capacity (slots made available for home delivery by all the big grocery chains have recently doubled) in ways that suggest structural changes likely to endure.

Supermarkets have learned how to steal categories from pubs and restaurants. What a few years ago was limited to the mimicking of freshly prepared meals made available for take-home or in-store consumption has now gone digital. A booming generation of grocery delivery Apps is replicating the ease-of-use of restaurant delivery / takeout software: another flourishing of home-centred online spending behaviour being hothoused by pandemic conditions.

Logistics will emerge as a key issue, as home-centred consumer demands continue to build. Retailers will find themselves exploring ways of extending networks or of rationalising range. Alternative delivery systems vie for dominance, and we are yet to see clearly a winner between the Tesco-style deployment of local store picking against major investments in dedicated warehouse Ocado-style automation technology.

Local spending is on the up. Smaller, specialist, artisan and environmentally concerned innovators are tapping into renewed local interest and are exploiting the full range of distribution channels (the food producers with multi-channel sales options). Those who can flex with online order-delivery capacity, will be better placed than others to ride out the uncertainties of a marketplace in flux.

The availability of labour. This promises to continue to shape developments. New, post-Brexit difficulties in locating workers – throughout the food industry, from primary agriculture onwards – may in some cases force an accelerated adoption of robotics and artificial intelligence.

Keep an eye on the social divide. It’s a recession – tipped by some to be the first double-dip recession since the 1970s – but the effects are unprecedently uneven, with those reliant on the gig economy and certain service industries bearing the brunt of the blow. UNICEF’s first-ever emergency response to food poverty in parts of the UK was among the final headlines of last year.

Many households, on the other hand, have proven their earning (and spending) power immune to the bite of social restrictions. House prices, it is interesting to note, went up last year (by 6%, according to the Halifax).

The feared tariffs of a no-deal Brexit may have been averted but there will be new complications. The exacting and laborious demands of new paperwork – of ironing out the inevitable niggles and inconsistencies – and of new trade regulations more broadly will slow commerce with Europe down. By how much we can’t yet know.

Foodstuffs with short shelf lives will be particularly vulnerable to additional burdens of paperwork and, potentially, price hikes.

Watch for the post-Brexit positives. A future outside the European Union may be uncertain but besides the challenges, it promises opportunities – such as freedom from the kind of regulations that since the 90s have restricted accreditation to certain branding and production processes, for example, under PGI (Protected Geographical Indication) and PDO (Protected Designation of Origin). These have been a benefit to some famous brands (Melton Mowbray Pies, the Cornish Pasty, Stilton cheese) but frustrating to others (notably the rejected accreditation of the famous Lincolnshire sausage).

More than anything, the British are world leaders in food innovation, and freeing of EU regulations could open-up a wealth of new avenues for creative food brand innovation.