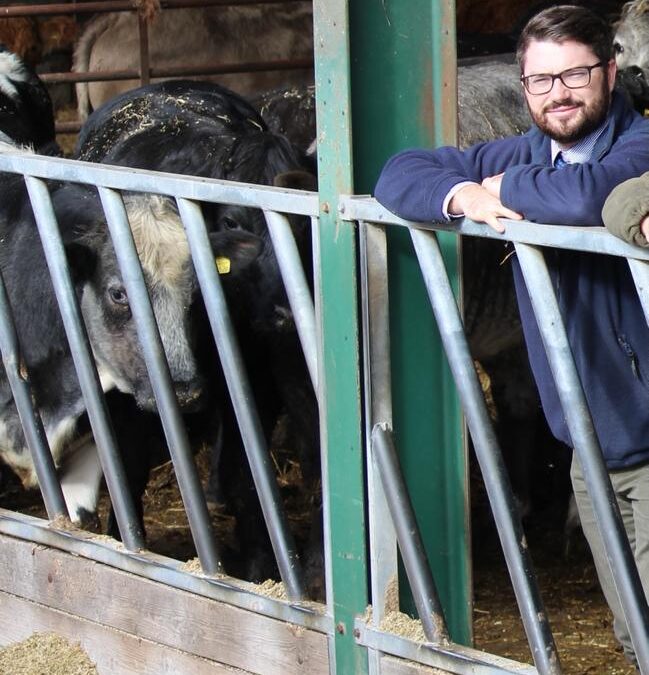 Earlier this year, we were delighted to welcome on board agronomist Charlie Dolphin as our new technical adviser. We asked him for a few moments of his time to get to know him better.

You started with Bright Maize in February. How is it going?

Really good. I’m really enjoying it. I’ve got plenty of responsibility, which is nice, and I feel valued as a member of the team.

What responsibilities do you currently have?

Mine is a sales role. The main objective for this season has been going through existing accounts and securing that business again. New business is also a high priority moving forward; we have some excellent varieties coming through the system.

Do you come from a farming background?

My grandparents were dairy farmers in Cheshire, just on the Shropshire / Cheshire border, and I spent a lot of time on that farm as a kid. Also, my father is a finance broker for farm machinery so I used to hang out with him on farms – around all these amazing tractors! – and that sort of sparked my interest.

Did you want to be a farmer yourself?

My dream was to be a farmer – if we’d had our own farm. But I didn’t want to work on a farm – I wouldn’t have had the motivation – if I was just doing it for someone else’s benefit. If we’d had a farm at home there’s no doubt, I would be a farmer. As it was, the closest I could get was to go into agronomy, advice and sales into agriculture.

You previously worked for Wynnstay. Why the move to Bright Maize?

How much time do you spend talking to farmers?

What kind of things do you talk about?

Generally, farmers like a second opinion. Quite often they’ve almost made a decision themselves and, nine times out of ten, it’s the right decision – but just to have that final confirmation helps. After all, it’s a big decision to make.

It’s good to hear that that support is there.

I think it needs to be. I think it always will be. Particularly with maize, I don’t think there’ll ever be a machine that can tell you bang on when you need to harvest. Because also it has to fit in timing-wise, it has to fit in around other farming practices. It’s a busy time of the year, September.

You said you also talk to farmers about varieties.

Yes. Variety choice is going to get more and more important now.

One of the things farmers are going to come under pressure from in the UK is the environmental factor – particularly with regard to runoff. Early varieties are going to become more popular so that harvest can be done earlier to try to eliminate some of that runoff. (For the same reason I think we’ll see more trial work done on undersowing with grass – just so you haven’t got that bare ground left over winter.)

I also think, what with the Ukraine and Russia and gas prices now, we’re going to see some pretty extortionate fertilizer prices. And perhaps with an earlier variety, which can be harvested earlier, and which doesn’t have quite as long a growing season, farmers can get away with a little bit less nutrition.

Presumably later varieties are still a good choice for some farms?

It depends on where you are in the country, on how much sunlight and how many heat units you get in a growing season. Your later varieties are still going to be well-suited to Kent or Devon where they’ve got more sun and nicer ground, where they can travel on the ground later on without causing so much compaction and runoff.

But with early varieties Bright Maize can reach more parts of the country?

Definitely. Where I am in Shropshire we see hardly any late varieties. Under certain circumstances, such as in north Shropshire where you’ve got a band of lighter land, you could get away with some later varieties. But even there, where they’re mixed farmers, and what with wheat prices going through the roof, they’ll want to be getting maize off early and putting wheat in afterwards.

So, as we expand our early variety portfolio we can go and get more involved in Shropshire, Herefordshire, Wales, Cheshire.

Do you have any interests or hobbies outside of work?

I’ve got two big ones. The first one’s shooting. I run a small private syndicate with my dad, two miles from home in Shropshire. We rent some land off a farmer and run a pheasant shoot on that ground – just with friends. That takes up a fair amount of my weekends during the summer.

Any time I’m not doing shoot work I’m almost definitely going to be fishing. Fishing is probably my first true love in life. I’ve been doing it since I was four years old. My grandad was a keen fisherman and it got passed down.

Both shooting and fishing are great ways of socialising. I’ve met some really good friends through both. It’s not very often any more I go fishing on my own – it’s normally with a mate or group of mates. We’ll have a barbecue and a few beers…

In winter – round about now, had I not had a back operation – I’d be fishing for grayling and trout which I keep to eat. But I’m more of a conservationist, to be honest. I like to catch and release.

And it’s the same with shooting. Although a lot of people don’t think that shooting and conservation go hand in hand, they really do. We carry on feeding through the winter and the game cover mixes we put in are all for songbirds; and we do quite a bit of habitat improvement in terms of tree felling and leaving the dead wood on the floor. We’ve got quite a lot of hares now on the farm. Numbers have increased.

We normally shoot about sixty birds in a day; and then all of that meat will be taken home by the guns that have shot it or by the beaters. None of it’s thrown away. If there does happen to be some left, then we dress it and take it to a local food bank or charity. And it’s fantastic, healthy meat.

What do you think are the prospects for British agriculture over the next five years?

It’s going to be a testing time. I wouldn’t say everything is against the farmer but…

You’ve got the loss of subsidies. That’s going to be huge. Then you’ve got increasing fertilzer prices. On top of that, on the agrochemical side, we are constantly losing active ingredients in fungicides and pesticides, which makes controlling your pests and your weed control that much harder. Wheat prices are at an all-time high; and if the wheat price is high then the wheat seed price is going to be high. The cost of production is going to get higher and higher – and I hope the government sees that we’ve got to start supporting British farmers more than we do.

I think we’re too reliant on importing when food gets expensive. We just import it from somewhere else. I don’t think that’s the right thing to do when we put such a big emphasis on our farmers in this country doing everything by the book. And, in the last fortnight, we’ve seen the risks that are involved with becoming too dependent on other countries.

Agriculture needs to up its game. It needs to become more efficient. And we need to be doing our part as seed producers to be making sure that we’re producing the very best that we can, that fits into the system and that produces as much per acre as possible. We need to maximise the land we’ve got.