BOOK REVIEW: WILLIAM SITWELL, EGGS OR ANARCHY. THE REMARKABLE STORY OF THE MAN TASKED WITH THE IMPOSSIBLE: TO FEED A NATION AT WAR (Simon & Schuster, 2016) 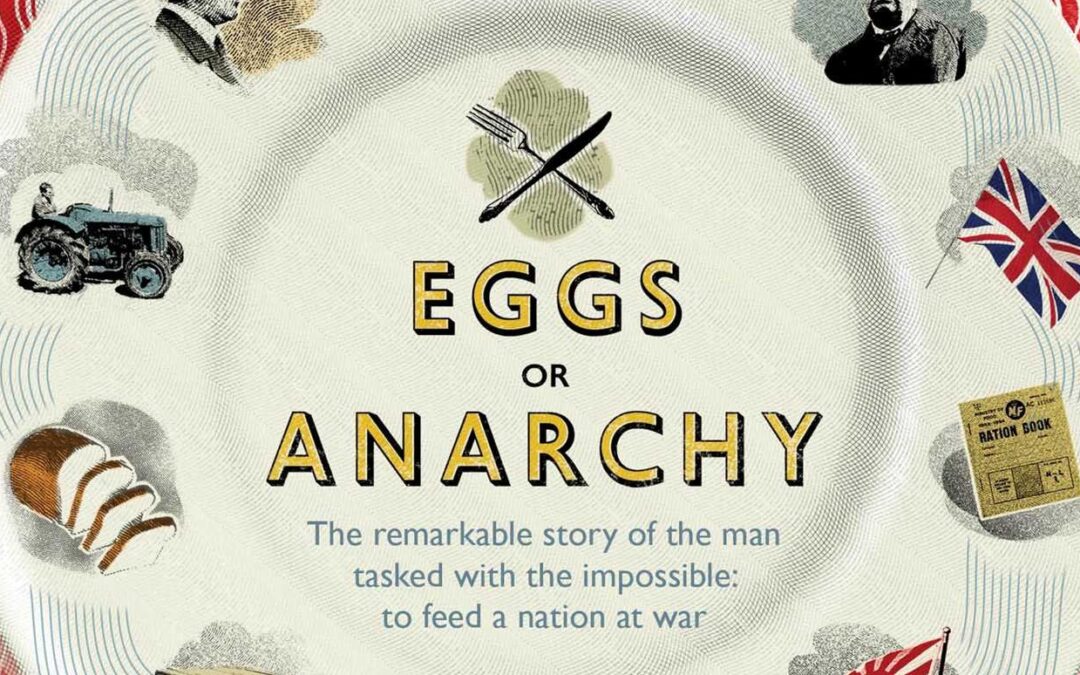 Feeding the nation has more or less been taken for granted in the post war years; but that premise is now being challenged as pressure mounts on production, supply chains and retail prices.

We thought it would be worth revisiting by way of this review the subject of a previous blog, the maverick Lancashire businessman Lord Woolton, whose experiences as the head of the wartime Ministry of Food were first set down by the man himself, in peaceful retirement, in his Memoirs.

By this stage a venerable elder statesman, Woolton was ready, in his reminiscences, to be frank; but his tone would be tempered by time and tact. His own account was never going to tell the whole story; though it was as close as we were going to get – until now.

Eggs or Anarchy gets us even closer.

Sitwell’s book draws extensively on the ‘quite extraordinary’ private writings of Woolton and his wife Maud, which the author has been among the first (outside the Woolton family) to access. Material marshalled includes the great man’s diary, his unpublished letters and jottings, Maud’s diary (the bolts of which Sitwell was given permission to break open), even Woolton’s marginal comments in Maud’s diary.

What we get, in consequence, is the inside story on what was already a remarkable narrative: Woolton’s dramatic parachuting (via a well-timed ennoblement) into the heart of the coalition government; his fight to keep up supplies through the stranglehold of the U-Boats; the bluffing and brinkmanship of the international food deals; the minister’s efforts, as rationing bit ever deeper, to keep public confidence high – while all the while keeping Churchill’s lack of support from undermining his own.

Woolton, of course, used his diary to let off steam. And Sitwell uses entries from it to provide a sort of running commentary – sometimes exasperated, sometimes sardonic – on the daily travails of life in government. We hear what Woolton really thought, when he got home of an evening, about this or that spat with the civil service (‘I don’t think the Colonial Office like me’) or the speeches he had to sit through in the Lords (from ‘dreary’ former Prime Minister Asquith to the ‘bigoted’ Labour peer Lord Arnold).

Such after-hours reflections give us the book’s central voice and perspective. But around them, with a novelist’s skill, Sitwell works the mechanics of a rattling good yarn.

He keeps in play an ensemble cast of characters – together with the character clashes essential to any good story. Churchill is virtually Woolton’s nemesis: the PM doesn’t like the idea of rationing any more than he likes that of a businessman in politics; while Woolton increasingly sees his boss as a ‘War Lord [who does] nothing to control or guide or influence the members of his government’.

In a lighter vein we have Sir Henry French, Permanent Secretary at the Ministry. He is Woolton’s Sir Humphrey, assuring the new arrival on his first day that the department ‘will do everything in its power to protect you, Minister’. Developments, though, are nicely traced as the comedy of cross-purposes gives way, over time, to an unfolding of mutual admiration – and that, in turn, to genuine friendship.

The book is full of vignettes and graphic set pieces – snapshots of the reality of ife in wartime Britain. One morning after a bombing raid, for example, we follow Woolton as he is driven first through the wreckage of Parliament Square (and a ‘considerably scarred Big Ben’), and on to Smithfields to witness the meat ‘still burning’.

It was around this time that, for its own safety, almost the entire Ministry of Food was moved to Colwyn Bay. Under cover of night, its 5,000 staff (together with all its paraphernalia ‘from pencils to cars’) was relocated to the small seaside town where every hotel, inn and school was commandeered. These addresses would henceforth be interconnected not by telephone but by a buzzing network of motorcycle couriers.

The book’s most vivid episode, though, is the reconstruction of what happened to a convoy of thirty-four Allied supply ships as they worked their way, in late November, 1940, into the North Channel. Over the course of an agonising twenty-four hours, six of them were, one after the other, picked off by torpedo as, around them, two U-Boats played cat-and-mouse with the convoy’s destroyers.

It’s not in the nature of Sitwell’s book to pursue any kind of critical evaluation of Woolton’s ultimate significance; to go through the details of who, in the end, really did what to meet that extraordinary challenge of ‘feeding a nation at war’. For what it’s worth, Richard J Hammond, author of the books on food in the official history of the conflict, has seen the overall balance in this achievement as fundamentally more that of Ministry than of Minister.

Nor is Eggs or Anarchy a full-length biography of the man whose life, after all, was full of interest both before and after the years of celebrity; a life which Sitwell himself at one point alludes to, all too tantalisingly, as ‘a journey from intellectual socialist, to practical businessman to right-of-centre politician’.

Such a tome remains to be written. But what we have for now, at least, and far more so than in Woolton’s own Memoirs, is a winning portrait of a man impossible not to like – and a book that’s impossible to put down.