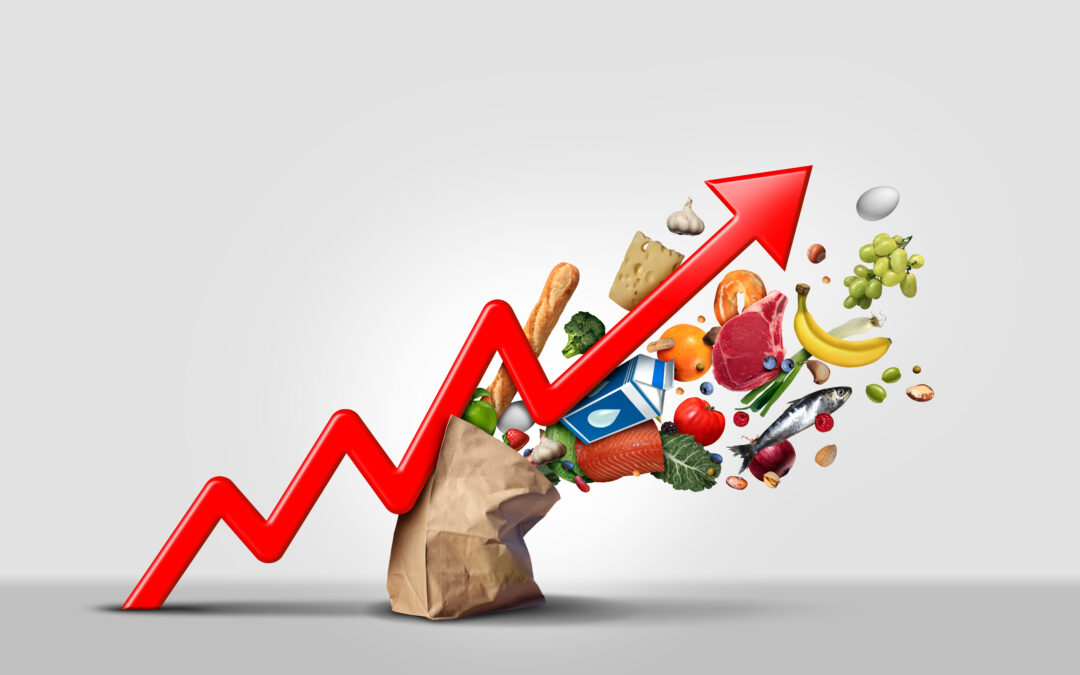 Food inflation hasn’t been going up this quickly for over a decade – and the worst is yet to come.

A flurry of recent studies furnish some statistics. Consumer group Which? found that supermarket groceries in February this year were on average 3.14% more expensive than they had been three months before. More recently, market analysts Kantar revealed that like-for-like grocery prices rose by 8.3% from May to June – a level not seen since April 2009.

And grocery trade body IGD forecasts an overall inflation rate for food and drink prices in 2022 of 10 to 12%, perhaps peaking at 15% in summer or autumn.

It’s a large, complex picture. There is no single, simple account of the forces driving this swathe of price hikes – not just in the food sector, after all, but, equally, in the realms of fuel, housing, transport and energy. And no one grocery product registers exactly the same level of inflation as the next: meat, cereals and dairy, for example, are at the moment all facing their own particular – and particularly tough – challenges.

The post-pandemic resumption of world trading activity – resurgent consumer demand on the one hand, residual constraints on production on the other – was always forecast to bring price inflations in every sector structured around international supply chains. In a number of respects, this economic scenario is far from played out (lockdowns continue in China; labour shortages may take a long time to neutralise).

These are pressures that, in the case of the UK, echo and exacerbate the legacy of Brexit. The existence of new costs to business of trade with Europe is thought by some to have led to an increase (a 6% increase, according to a study published in April) in the price of food generally; and, again, with border arrangements now not set to be finalised until 2023, it’s a story that isn’t over.

Food producers have naturally had to cope with more immediate crises too. Last year in Western Canada, for instance, the worst droughts for sixty years crippled production of, to take two examples, durum wheat and mustard seeds – and this has directly impacted the prices of pasta and mustard worldwide.

Then there is the war in Ukraine, which has driven down the availability (and pushed up the price) of key cereals and sunflower oil. It’s a development that happens to illustrate particularly well how supply problems beget further supply problems – and how troubles can feed off themselves. In April, for example, to conserve its resources, Indonesia banned most of its palm oil exports, as, in May, did India its exports of wheat.

And, of course, in aggravating the global fertilizer crisis – with access to Russian potash, ammonia and urea and to Russian and Belorussian potassium now compromised – the war’s effect on the world’s agricultural output can be seen as at once palpably direct and inquantifiably pervasive. Countless are the farmers whose yields will be smaller this year thanks to reduced applications of fertilizer.

Little within this confluence of inflationary forces is expected to subside – much – over the next twelve months.

Consumers are already adapting. Kantar notes an upward trend (of 2.9% from May to June) in the sale of own-label supermarket products and a drop (by 1%) for branded items. More strikingly, the same research saw a 12% rise in the sale of supermarket value own-label lines; and if any retailers may be said to have benefited from these migrations it is Lidl and Aldi, the fastest-growing grocers over the quarter (though still minor players on the bigger stage).

Budget brands, then, are functioning as a kind of safety valve – allowing shoppers who are prepared to ditch favourite labels more room for manoeuvre within the limits of their weekly spend.

This consumer option has its own limits, though. Since profit margins on budget brands are relatively narrow, the products are less able to absorb costs upstream in the way that more expensive brands can. For this reason a packet of, say, value own-label pasta may not be able to be discounted (and may even have to go up in price), even as its upmarket alternative gets cheaper.

It’s a situation compounded by the fact that many of the staples that supermarkets price most competitively, whether or not they feature in value ranges – bread and pasta, milk and cheese, chicken – represent some of the foodstuffs currently most vulnerable to inflation.

Are people, then, simply going to be buying less food as it becomes more expensive? It seems inevitably so. Though the proportion of household budgets spent on food may grow larger (as non-essentials like clothes and holidays are reprioritised), about half of shoppers are already reporting that they are indeed buying less food (49%, according to new ONS figures).

The social implications of this fact – in particular, that one in seven households is currently ‘food insecure’ – were recently highlighted by The Food Foundation.

Perhaps it was inevitable, then, that when Defra published its Government Food Strategy in June, it should lay special emphasis on its ‘plans to strengthen the resilience of our supply chains and boost domestic production to help protect against future inflation, economic shocks and crises’.

It’s a controversial document (albeit more for its alleged neglect of environmental and health concerns than anything else); but its ambitions to ease labour shortages in food production, to drive up agricultural productivity through investment in innovation and to upgrade supply chain efficiency closely mirror the economic requirements of the moment.

And few dispute the urgency of those requirements.