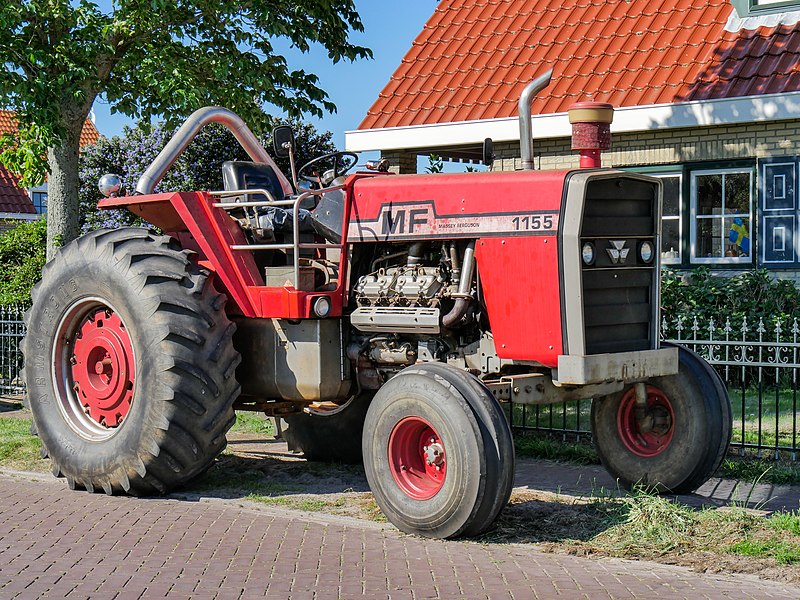 His name lives on in the famous Massey Ferguson tractors. But Harry Ferguson wasn’t just the owner of one agricultural machinery company that merged with another back in 1953. He was by that stage coming to the end of a long and colourful career, one filled with drama and invention. And it was thanks to one invention in particular – the three-point linkage system of hitching ploughs and other implements to tractors – that Fergusson can lay claim to being a true pioneer of agriculture.

He was born, in 1884, on a farm in County Down in what was then the United Kingdom of Great Britain and Ireland. The young Harry was happy neither at school nor at home (clashing often with his strict Plymouth Brethren father); but he found his passion and purpose aged eighteen when he went to work in his brother’s car and cycle repair shop on Belfast’s Shankhill Road.

Harry found he could not only mend engines; but also that such work couldn’t satisfy an emerging obsession with all forms of powered travel. He became fascinated by the new phenomenon of airplanes – and proved himself no amateur dabbler when he designed and built the first plane to fly in Ireland (the Ferguson monoplane).

Was a career as one of the fathers of aviation about to take off? For several reasons no. In 1913 Ferguson married and pledged to keep his feet safely on the ground. But the Great War also intervened and made the question of national food production urgent: the talents of Harry Ferguson, as of so many, were recruited to the cause of more efficient farming.

Ferguson was asked by the Irish Board of Agriculture to tour the island and make a study of how tractors might be used to better effect in the field. It was the perfect project for Harry, who by now had set up a dealership in cars and tractors, but whose inventor’s mind was still hungry for a challenge.

He straight away saw the problem: that early tractors were being treated as simple substitutes for horses. Heavy ploughs (often the very same that horses had drawn) were being loosely linked to the backs of tractors by single couplings, and being passively dragged along. This was dangerous (if the plough hit an obstruction the tractor could flip backwards), slow-going and inefficient.

Ferguson was not the only one to perceive that a tractor and its plough would function better as a rigid unit; but he raced ahead of the pack in designing a unifying system that would eventually become standard.

The ‘Ferguson System’ – elements of which were patented throughout the 1920s – was in the end a triangular set of three attachment points by which the trailed implement would lock fully into the back of the tractor; and in such a way that concentrated pressure, and thus tractive power, low down and towards the front of the ensemble. This transformed safety and manoeuvrability. Draft forces were further used, in combination with hydraulic pumps, to regulate the depth of the trailed implement automatically.

The system would see Ferguson’s name into the history books; but, before then, it would bring the man a lifetime of business ventures and misadventures as he sought both to promote and to protect his creation.

These dealings had begun as early as 1920, before the Ferguson System was fully patented, when Henry Ford (whose Fordson tractors were notorious flippers in the field) had approached Ferguson with an offer to buy his designs; an offer which Ferguson had ambitiously declined.

But Ford’s influence over the wider marketplace was not so easily evaded. In 1928 Harry had to panic-sell a stock of Ferguson System ploughs specially made for Fordson tractors when US Fordson tractor production ceased. Then, when Ferguson started making his own tractors in partnership with English motor manufacturer David Brown, he found his models unable to compete on price with the UK Fordsons being made at Dagenham.

It was perhaps inevitable that the two men would meet again. Each finally unable to ignore the other’s importance, they concluded, in 1938, the famous ‘handshake agreement’: a partnership contracted entirely verbally and on trust, on the strength of which tractors designed by Ferguson would be manufactured by Ford, including in the UK.

For a time the arrangement worked well – in America. During the 1940s over 300,000 Ford-Ferguson tractors were made; and one in five farmers, President Roosevelt included, was a customer. But the hoped-for UK side of operations did not materialise, the directors at Dagenham committing instead, after the war, to a new generation of Fordsons.

Harry again had to dig deep and plough on. He wanted more than anything to see his tractors on British soil. The deal he needed to do came in 1945, courtesy of the Standard Motor Company, whose wartime aircraft engine plant at Banner Lane near Coventry became the manufacturer of the latest Ferguson-designed tractor.

This was the celebrated TE-20: the ‘Little Grey Fergie’ of legend. Rated at just 20hp, it was smaller and lighter than ever, yet, armed with the all-important three-point linkage system, the machine could outperform far bigger tractors at a fraction of the cost. It was pretty much the ideal which Harry had been working towards for over twenty years; and by 1956 over half a million had been made. 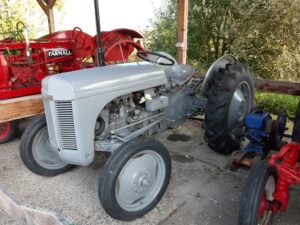 The success of this period was tainted by the final deterioration of Ferguson’s relationship with the Ford company, after 1945 under the steer of Henry Ford II. The gentleman’s agreement was by this time over and Ford’s latest tractor could be clearly seen to infringe Ferguson’s still-active patents. Years of legal action followed, at the conclusion of which Harry was awarded over $9 million out of court.

By the end of his life, Ferguson could count himself the universally admired creator of the world’s favourite tractor; but there is equally no doubt that the years of difficulty and dispute – particularly with Ford – left him deeply bruised and disenchanted. The overdose of barbiturates that ended his life in 1960 may or not have been deliberate.

Harry Ferguson had been, at heart, not a businessman but an idealist and a reformer. He had come, over the course of a life lived through two world wars, to care above all about efficiency in farming – ultimately as a way of enriching the economy through the land. As he himself once wryly remarked, ‘Agriculture should have been the first industry to be modernised and not the last.’