JOE IVES DESCRIBES THE ADVANTAGES OF HIS ROBOTIC MILKING SYSTEM 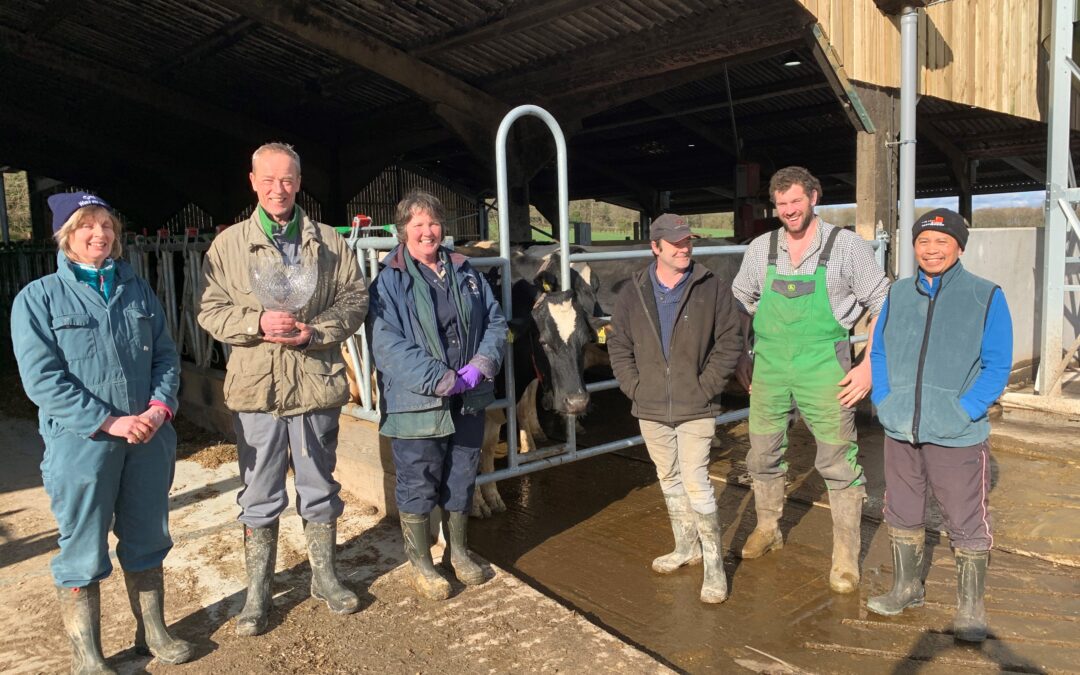 Back in 1958, Bill, an evacuee from London, and Peggy Ives, newly-married with little farming experience, took on the tenancy at Park Farm on the Herriard estate, near Basingstoke, Hampshire. Bill and Peggy decided that the best way to optimise their income was to go into dairy farming. They soon developed an interest in genetics and concentrated on long-life high-yielding pedigree Holstein cows. In the early 1960s they named their herd, the Gladwake Herd.

Still trading under the name W & P Ives, the business is now run by son Joe Ives, who joined the business in the 1980s, though now in his late 80s, Bill continues to take an active interest. The farm is on 600 acres, 100 acres of winter wheat, 220 acres of maize (Joe is a Bright Maize customer), and the rest grassland. There are 240 cows. In 2019 the Hampshire herd gained 5th place in the NMR (National Milk Records) annual production report for the year ending September 2018, climbing 14 places. In February 2020, their Gold Cup qualifying Gladwake Holstein herd won the Chris May Memorial Award 2019 for the UK herd with the highest lifetime daily yield, reflecting the herd’s high levels of milk-production, health, fertility, and longevity.

Park Farm has just gone over entirely to robotic milking. The old milking parlour way, says Joe, presented too many challenges. It was restricted to a rigid 3-times-a-day milking. The whole operation of driving the cows to the parlour and milking them was stressful for the animals. It wasn’t much better for Joe or his colleagues either, dealing with stressed animals in old buildings and an out of date environment. The anti-social hours also meant labour shortages were a problem. 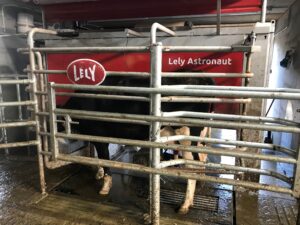 One of the 4 Lely Robotic Milkers

There are now 4 Lely robots in situ at the farm, with groups of 55 cows allocated to each robot. Joe tells us that the result has been a high yield of milk all the year round – 13,000 litres per head this year. The milking parlour is no longer used. The cows have a much better environment in which to express themselves. They go to the milking robots themselves when they are ready. The robots are easily accessible in the barns, and there is lots of space for cow traffic. They are not driven about, but go whenever they want. This takes some getting used to for the cows, but it works. All cows average 3.3 milkings per day, yielding more than the 3 daily visits to the old milking parlours. The highest-yielding animals have 5 milkings a day.

The robots do not just do the milking. They monitor the cows’ health. The robot analyses the milk at every milking for mastitis, cell counts and temperature. Each cow has a transponder on its neck. The robot picks up data during the milking procedure, which the herdswoman, Sally, who arrives at 5am, reads on the computer – her first task of the day. She can see from this data which cows are flagged and need attention. The robot also weighs the cow, so if it has just calved and is losing too much weight, then that will flag up as well.  The Robot will usually spot mastitis well before it could ever have been spotted in the milking parlour. At this early stage it can be treated naturally, for instance with an udder mint.  There is less need for antibiotics. Joe tells us they are using a quarter of the antibiotics they used to use.

Lely – the robot supplier – is a Dutch company. On their website they claim Robotic milking is an important link in the food chain which they describe as “from grass to glass”. But Joe says the robots do not replace good husbandry and stockmanship. When the cows are being fed, Joe and his colleagues rake the sand beds and take the chance to make a good visual assessment of the cows’ health, notably checking that the animals are feeding properly. Joe ensures that they make the best sileage that they can for their cows. His colleague Phil is in charge of the feeding. The maize is analysed with the help of nutritionist Mike Bray from Kite Consulting, the UK’s leading dairy consultancy. An 18% nut is fed in the robots up to 10kg/cow/day and Phil mixes the forages daily, and feeding out with the feed wagon starts at 6am. There are robots operating here, too. Lilian and Sally, named after staff, push the feed up so it is more accessible for the cows. They travel on their preordained route and push the feed up every two hours, so the cows can get as much as they want. Joe says he wants the cows to have decent sileage in front of them 24 hours a day, so that they have as much feed in front of them at 3am as they do at 8am. This is a great improvement on the old feed-bunker system, which depended on human intervention every morning – shovelling the old feed out, which everyone hated doing. The old system meant that cows would go for periods with no feed. The robotic system means the cows eat more… and produce more milk.

The Gladwake herd is a high health status pedigree herd, much sought after. Joe tells us they use sexed semen in the breeding process, the aim being to get female calves from their best cows. There is a good market for these calves, and breeding and selling on is an important part of the business. They have just started genomically testing all their young stock. They can then sell the heifers with a full DNA checklist which give indicators to the buyer what the animals will potentially be like when they are older. Alongside the 240 milking cows, there are currently 260 head of young stock, many of which will be sold. 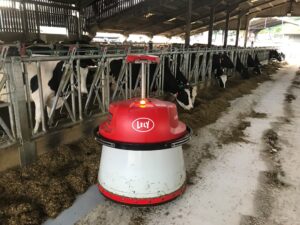 Joe says that labour was the biggest problem on the farm. He used to put much of his effort into managing teams of workers, mainly from Eastern Europe and the Philippines. The introduction of robots means that he has a much smaller core team, and he can now concentrate more on the cows and the farm as a whole, rather than just managing people.

W & P Ives’ main milk customer is the Medina dairy in Wickham, South Hampshire. Medina supply a lot to large food service industries, and much of this business was lost during the COVID-19 pandemic. Joe is hopeful that the NFU will improve the lot of the dairy farmer where milk contracts are concerned. At present businesses like his suffer from prices being forced down by dairy processors. He sees farmer-owned co-operative dairy businesses like Arla as being the way ahead.

It would indeed be fair if the price reflected the quality of the product. Not many people would dispute the quality of Park Farm’s milk and the planning and investment that has gone into its production, as has indeed been the case on many dairy farms.