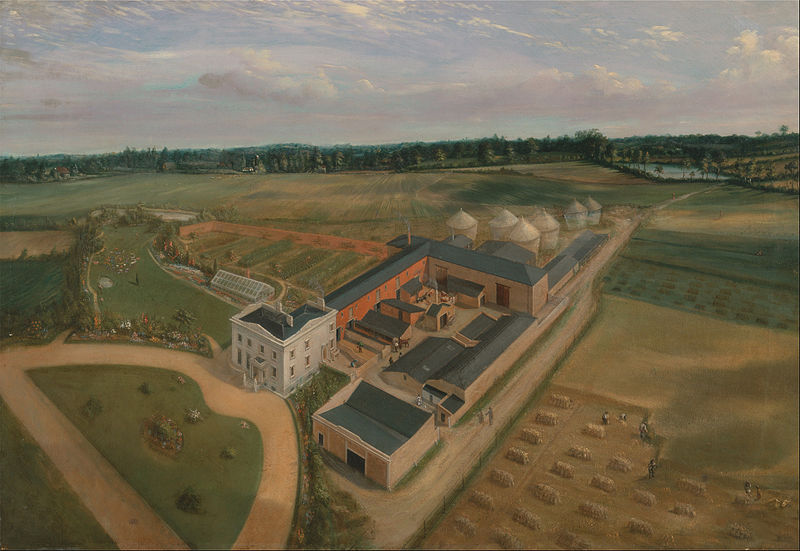 Those who have had dealings with the Royal Agricultural Benevolent Institution may have come across the name of John Mechi – the man who, in 1860, founded what is now the UK’s oldest farming charity. But not everyone familiar with the name will know the full, and surprisingly colourful, story of the life behind it.

He was no kindly Victorian philanthropist. He was not even himself a farmer to begin with. John Mechi was a merchant and manufacturer who came to farming only half way through his life; but who, when he did, tore up the rulebook. For forty years in the middle of the nineteenth century his model farm at Tiptree Hall in Essex served as the era’s most celebrated showcase for radical agricultural reform.

The man was a Londoner, born in the capital in 1802 and immersed from the beginning in its culture of commerce. He worked as a city clerk before, in his mid-twenties, setting up as a maker and retailer of household goods. He did well, moving from premises to premises as business thrived.

Mechi was ambitious, even by the aspirational standards of his day. He made everything – from simple tea-caddies and toothbrushes to bespoke, velvet-lined jewellery cases (surviving examples of which still come up in auction today). Some of his products became bestsellers. Most notably, a patented razor strop was within a decade being sold by over 5000 druggists nationwide.

He made his name and his fortune in this way before the age of forty. Still, on the cusp of middle age, Mechi continued to feel short of a challenge; and he began to cast about for pastures new. Before long, he found them – 130 soggy acres of them – near the village of Tiptree, 50 miles outside London. He purchased them and in so doing became, in 1841, England’s newest gentleman farmer.

Mechi had, of course, no experience. But he did have money; and he had ideas – gleaned from the latest literature on agricultural science. And he was sufficiently inspired by his reading to set out on a wholesale, root and branch overhaul of the English farming landscape.

Quite literally: he began by tearing up trees and hedgerows. It was an opening offence against pointless convention – and a commonsense bid to replace irregular plots, ‘short lands’ and myriad ‘villainous stumps’ with an accessible arrangement of fields fit for long lines of cabbages and corn.

He modernised too the farm buildings and their layout. Now a main structure faced north-east so that animals and labourers in the yard might be sheltered from the coldest winds. And an expensively equipped barn boasted both threshing machine and corn mill, horse-powered to begin with but soon driven by steam.

The steam engine alone, in a part of the world still scarcely touched by the industrial revolution, was enough to raise eyebrows – it was thought ‘as dangerous’, says one contemporary account, ‘as the very dragon in Scripture.’ But it was only the beginning of Mechi’s total vision for a farm transformed by science and engineering.

The next decades saw him invest in repeated experiments to prove the principles of proper land drainage. Mechi’s efforts in this regard were part of a larger national movement, one enabled by advances in drain tile manufacture and fostered by government loans. But there was at mid-century still widespread ignorance about the benefits of the practice; as well as uncertainty as to the best way to go about it.

At Tiptree, Mechi trialled various systems, deep and shallow; and scrutinised the workings of water through soil at every stage – as affected by gravity, capillary attraction and evaporation. He worked out the best solution for his land and was as energetic in publicising his successes as he had once been in touting his London wares. Related experiments with depth of tillage and style of sowing (heavy or thin) were similarly successful, and similarly advertised.

Fertilizer was, for Mechi, a precondition for the productive farm – and another subject for investigation and tryout. The power of guano had been discovered earlier in the century and, in 1845, Peru began exporting to Europe the world’s best. Mechi naturally subscribed to the craze, but also had the foresight to think, long term, about more sustainable approaches.

Hence the experiments with liquid manure. This culminating feat of enterprise saw cattle installed in a shed, though the floor slats of which dung would fall into a chamber below. The manure would then be propelled by steam-powered jets of water (fresh from the farm’s own drainage pipes) into a great underground cistern – from which point, now in liquid form, it could be pumped through an irrigation network into any of Tiptree’s fields.

Those who came to see Mechi’s marvels, though appreciative of the education, nevertheless wondered how such projects could ever, in the end, pay for themselves. This was ‘high farming’ on an untested scale; speculating to accumulate in a manner not seen before in agriculture, and drawing on reserves of capital available to no average farmer – and which perhaps not even the likes of Mechi would ever see back.

As, in the end, he didn’t. He had always asserted the farm’s profitability; even, in 1867, publishing its balance sheets. But he had, perhaps, all the time been protected from the larger vagaries of fortune that only truly seasoned farmers know. For the best part of twenty years two major overseas conflicts, the Crimean and the American Civil War, had helped hold up the price of grain. But from the 1870s cheap imports combined with poor harvests to bring times too hard for Tiptree to survive.

As fate would have it, Mechi saw the coincidental failure of some crucial investments in the city. The man who had been the toast of the county, an elected London alderman, and star of international exhibitions, died a bankrupt.

His contemporaries would have called it a cautionary tale. But were the doubters right? Not entirely. For all those who had always predicted ruin for John Mechi, there were countless others who had learned from his labours – and who would long continue to do so from his published studies. Talk of the prodigal would in time give way to the legacy of the pioneer.