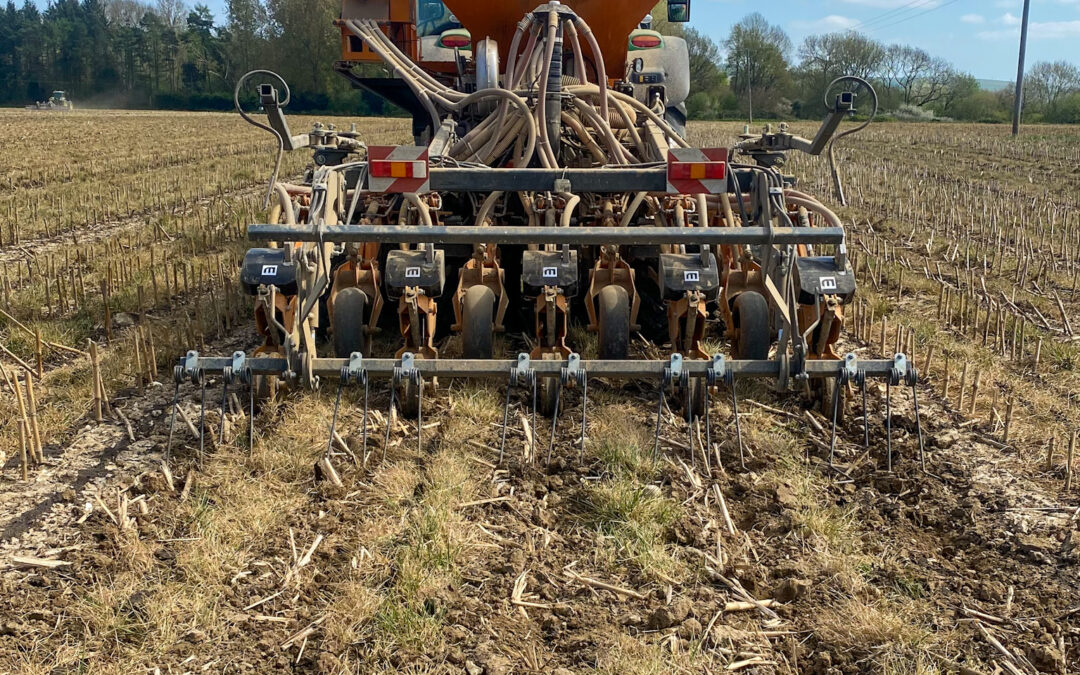 Strip-tilling is currently seeing something of a resurgence, and, in many situations, the farmers using it are getting some very pleasing results. However, the practice is not for everyone and, in this article, Farm Zone talks to Frans de Boer, managing director at DB Agri in Sussex, to take a look at the pros and cons of the technique. Frans runs 800-acres from Wappingthorn Farm, as well as an Anaerobic Digestion plant…

Readers might recall from a previous article that Frans also sells Bright Maize seed to other AD plants and advises operators on all aspects of maize cultivation and use. In this article, he takes us back to the beginning of the maize-cultivation process – tilling the ground in preparation for planting the seed. Ever the innovator, Frans gives us his perspective on the concept of strip-tilling.

For years, it has been common practice in agriculture to plough – invert the soil – or cultivate – move all the soil – in an arable field as part of the preparation for planting. In the past 20 or 30 years, new thinking has led some farmers to abandon tilling altogether, in favour of ‘no tillage’ which saves on costs and improves soil structure. And now strip-tilling is enjoying a resurgence. A sort of half-way house, it involves only tilling the strips of soil where the seed is going to be sown, leaving a wider strip of untilled ground between each row.

Frans tells us that he uses the strip-tilling method for all their cereals and a proportion of their maize. He says strip-tilling does throw up challenges for farmers, mainly around the issues of equipment cost and speed of operation. Strip-tilling machines are specialist equipment and are expensive – too expensive, most likely, for an individual farmer to add to a perfectly usable traditional tilling machine and conventional drill, assuming these lurking in one of his barns. Frans was fortunate to receive a DEFRA Leader Grant and he invested in a Mzuri strip-tilling machine, a high-end piece of kit which simultaneously tills the soil and drills the seed with the ability to also apply starter fertiliser and drill an alternative companion crop in between the maize rows if desired. 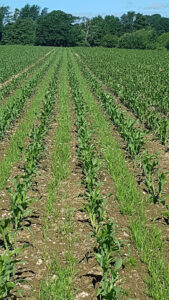 He says farmers might club together to purchase a machine, or they might hire in contractors who have the equipment. Either way, it can seem expensive at the outset. The strip tilling process takes longer than traditional tilling methods, making it a more expensive option but one must bear in mind that it is only one pass compared to multiple passes using a traditional method. Also, if farmers are new to the strip-tilling method, they might need to do some pre-cultivating to prepare the soil if historic compaction is a problem or if the field is uneven or rutted due to a wet harvest, as the soil will be tight and there will not be good structure. Furthermore, they might need to be prepared to see a lower yield in the first three years before they start to see the benefits. Another challenge in maize, Frans tells us, is the Corn Borer. Strip-tilling will not reduce the larvae over-winter, so they can increase in numbers in continuous maize situations. The solution to this problem is better crop-rotation, though this might not be an option for some. A lot of maize is drilled by contractors and in the main they simply aren’t geared up for strip-tilling, because of the high capital outlay required for this technology, the currently small uptake, and the speed of operation compared to precision drilling.

They seem to be quite major hurdles, so we asked Frans what the advantages of the method are. They are significant. The biggest benefit is that the farmer is moving less soil. Frans tells us that for his maize crops, they only move a 10cm strip every 66cm – a massive reduction in soil movement. This is good for moisture retention, soil-structure, biology, and keeping carbon in the soil. Losing carbon means losing organic matter, which means effectively destroying the soil. Better soil with higher worm-counts and better biology means better crops and less dependence on fertiliser. These are both agricultural and environmental benefits. Also, moving less soil means the ground will be firmer, so even in wet autumns, the machinery can still get around in the fields. For farmers who have tried no-tilling, in order to preserve soil structure, strip-tilling offers two major benefits: While only minimally disturbing the soil structure, it raises the temperature of the soil significantly, and allows plant feed to penetrate deeper into the soil – two factors which encourage good growth.  An extra bonus is that as the machines do the tilling in one ‘pass’, they are more efficient in terms of wear and tear on metal parts and the fuel saving is significant compared to traditional methods.

Frans tells us that strip-tilling is not a new method. It’s quite well-established in the USA and parts of Europe, but traditional UK farmers are not so keen on the method.

So why is there something of a resurrection now? We put this question to Frans, and he told us: “Everyone is looking at the cost of production. In the long term, in spite of the high initial capital outlay on the machines, and the longer time spent on the operation in the field, strip-tilling can actually work out cheaper, as it results in better yield. Also, improving soil health is high on the agenda these days, for agricultural and environmental reasons. There is funding available through grant schemes and these types of techniques are likely to feature in the new ELMs (environmental land management scheme).

As a final aside, Frans says “the ability to drill grass in between the maize rows, and drill the maize with a precision planter while applying starter fertiliser down the spout for only the maize rows all in one pass straight into cultivated ground is a game changer. The only slight issue is wet cold springs when ground refuses to dry out. We are looking at the possibility of a strip-till cultivator to lift the ground and dry it out and warm it up in front of the Mzuri drill to improve work rates.