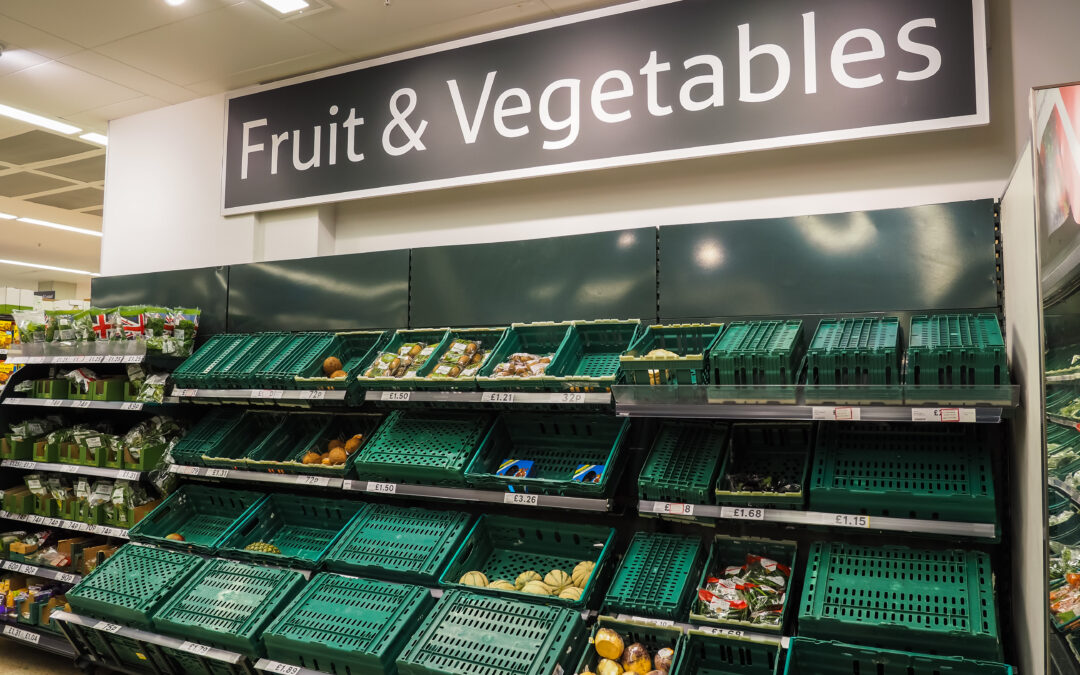 In July the headlines were back, accompanied by images of empty supermarket shelves. There was talk of supply chains ‘starting to fail’ and rumours of panic buying. Apologies to consumers from industry bosses kept pace with calls for calm.

It was a state of affairs that should have surprised no one.

The final lifting of social restrictions a few weeks before had seen the country’s behaviour surge back towards something like normal, putting sudden strain on a food delivery system that in some respects (such as demands from the hospitality sector) had long been operating on go-slow.

And getting back up to speed, it turns out, is going to be far from simple.

For those empty shelves – far from reflecting any scarcity of food per se, or at least any difficulties with its production – are in fact the direct expression of labour and logistical problems that pre-date the pandemic and that run right the way through the system.

As David Visick of the Federation of Wholesale Distributors recently told The Big Issue, ‘The media would like to say there’s a shortage of food – there isn’t. It’s just increasingly difficult to get everything to everybody who wants it when they want it.’

Prominent amid recent complaints of staffing crises in the food industry are the figure of 10,000 vacancies in its plants identified by The British Meat Processors Association – a sizeable 10% of its represented workforce. So serious is this particular shortfall that, according to a report in The Guardian, prison inmates, ex-offenders and ex-servicemen are all being lined up to help ease the strain.

The loss of EU workers to Brexit is a commonly cited problem. The British Poultry Council has claimed that one in six processing jobs remains unfilled by workers no longer in the UK – and that this has caused a 10% drop in poultry production.

Over the summer, fears of unpicked fruit and vegetables have, perhaps inevitably, been realised – despite the government’s expansion of its Seasonal Worker Pilot to 30,000 visas for 2021. The anecdotal evidence is of unharvested courgettes and peppers and of blueberries ‘rotting on the bushes’.

If there’s a standout corps of missing labour, though, it is – as has been well covered in the media – that of lorry drivers. 90,000 is the figure put on the deficit by trade body Logistics UK, whose plea to the government to issue temporary work visas to EU HGV drivers was recently rejected.

The predicament derives not just from Brexit and the delays brought by new border bureaucracy: being based here is now, for EU drivers paid by the kilometre rather than by the hour, freshly expensive. It’s also partly, though not entirely, to do with Covid, which froze driver training and testing for twelve months.

It’s also, more profoundly, the symptom of chronic low morale within the line of work itself: stress, undesirable working conditions and poor treatment by employers have all conspired to keep younger people out of the sector – putting the average lorry driver’s age in the mid-50s and retirement, as a concern, on a par with the legacy of Brexit.

The issue is system-wide: frustrations over no-shows on the high street are being mirrored by hold-ups at the point of production. This summer has brought reports of worrying delays in the pickup from farms of everything from milk to barley – not to mention lengthening lead times in the supply of animal feed.

As a new report prepared for the Food and Drink Federation puts it, these ‘are [labour] shortages that cover the full breadth of the supply chain’. If left unaddressed, the report continues, they could ‘have significant economic implications for the UK.’

The earliest of those implications may already be visible. With the government standing by its decision not to relax the regulations around hiring from abroad, British businesses are going to eye-catching lengths to incentivise domestic recruitment.

Some supermarkets and logistics companies are now offering drivers salaries in excess of £50,000 a year, with extra perks such as free training, joining bonuses and discounted holidays also on the table.

Many in the industry see only one way that such reforms can, in the long run, be funded: by the consumer. As Rod McKenzie of The Road Haulage Association recently told PA Media, ‘This … is a cost that will need to be passed on, and given the tight profit margins of most haulage operators that means their rates to customers will have to go up. In turn, this may mean more of us paying higher prices for goods, services and shopping – including food prices.’

The well-documented decline in the proportion of UK household income spent on food (to about 8%, less than half of what it was two generations ago) reflects not just the relative increase in spending on, say, housing and services. It has also been enabled by the evolution of a food production and distribution system that has exploited everything from automation technology to global capitalism to minimise inherent expenses.

While its successes have been impressive, it is becoming increasingly doubtful whether they are sustainable; whether they can survive, that is, the remarkable series of disruptions that have been visited on them.

And while some of those challenges (such as Covid) were entirely unforeseeable, others, such as Brexit (as a grass-roots expression of political localism) or the encroachments of global warming (following industrial damage to the environment), were perhaps all along hatching within the workings of the system itself.

All of which may simply be to suggest that cheap food was always an illusion; and that the age of such illusions may finally be coming to an end.