BOOK REVIEW: PATRICK GALBRAITH, IN SEARCH OF ONE LAST SONG. BRITAIN’S DISAPPEARING BIRDS AND THE PEOPLE TRYING TO SAVE THEM (William Collins, 2022) 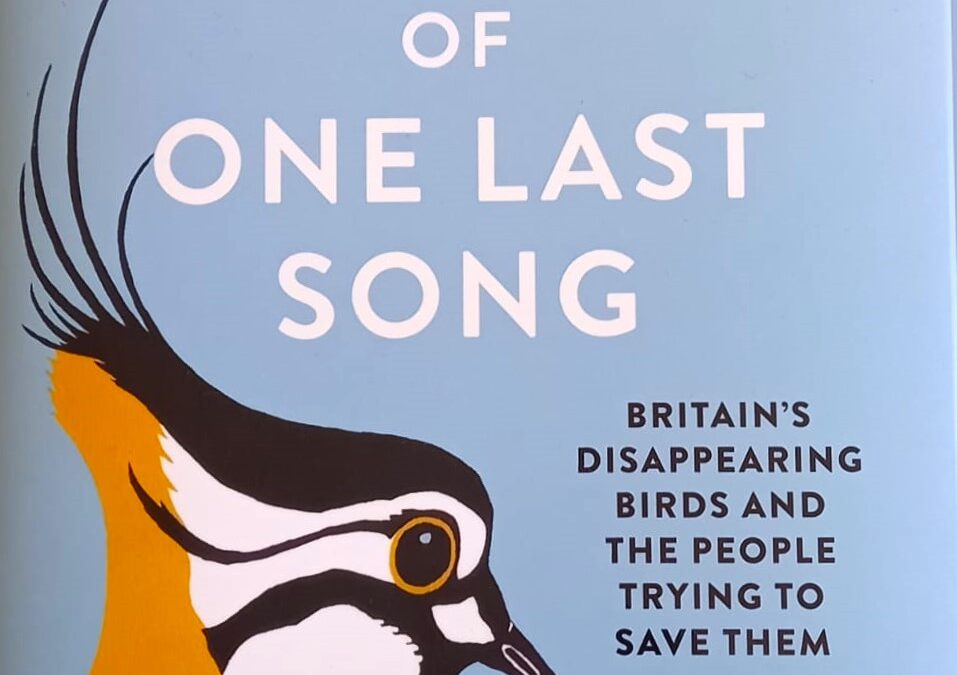 Dr Tom Adair – a writer living in France – reviews this book for Bright Maize.  The contents of the book do not necessarily reflect the views of Bright Maize, its employees or others associated with the company.

Why do birds matter?

There are scientific – good scientific – answers to that question. Birds distribute seeds and pollen; they control insects and recycle carrion; their diversity and population numbers are important indicators of the health (or sickness) of the broader natural environment.

But for an understanding of exactly how much, and in quite what way, certain birds matter to certain people it is necessary to read In Search of One Last Song by Patrick Galbraith.

The book is the record of the author’s quest – through Scotland, England and (briefly) Wales  – to interview the remarkable individuals fighting for the survival of ten of Britain’s rarest bird species.

It’s a journey to the margins – often geographically, always culturally. Chris Dodson, a thatcher in the East Anglian fens, explains that with the demise of managed reed beds the bittern is losing its ancestral home. Old Billy Jolly in Kirkwall remembers when industrial fishing first stripped the local waters of sand eels, staple diet of the kittiwake (whose numbers in Orkney have now fallen by 90%). Graham Denny on his 200-acre Suffolk farm puts hedges over profit for the sake of the area’s few returning turtle doves.

The forces threatening these birds’ extinction are multiple and complex and ultimately different for each.

Certain themes, though, emerge – foremost among them the environmental consequences of intensive agriculture. From mechanised harvesting to pesticide use; from the practice of winter cropping (fatally disruptive to the nesting habits of both lapwings and grey partridges) to, above all, the decline of the small but biodiverse ‘patchwork’ farm in favour of 50-acre fields of ‘arable desert’.

The black grouse, hit hard by this last development, has had additionally to contend with the coming of commercial forestry to moorland hillsides: though they are initially hospitable, once the trees are grown and canopies close over, the grouse’s diet – ground-level berries, buds and heather – loses the light and dies off.

Game shooting, too: commercial pressures are held to be skewing delicate ecosystems out of alignment – as with, so the argument runs, the reckless overinflation of the (red) grouse population by estates on which predatory hen harriers have been correspondingly persecuted to the point where just 700 breeding pairs remain, countrywide.

Voice after voice in In Search of One Last Song talks urgently of the need to recalibrate imbalances in the natural environment – and those who sound most frustrated are those who feel their hands most senselessly tied.

The ‘massive link’, for example, that Highlands gamekeeper Ewan Archer sees between the decline of the capercaillie and the resurgence of the pine marten is something he is powerless to act against. It seems the Scottish government won’t authorise any kind of population control despite seeing ‘plenty of pictures of pine martens coming out of capper nests with eggs in their mouths’.

Down in Ceredigion, lapwing sanctuary founder Charles Grisedale feels similarly thwarted. ‘The trouble,’ he says, ‘is that the biggest enemies of the lapwing are badgers, ravens and the goshawk, but you’re fighting against politicans who want to get elected and their ignorance of the countryside is phenomenal. These people have never had mud between their toes.’

‘They won’t,’ he concludes, ‘take difficult decisions to achieve a balance.’

All views expressed in the book are those of its protagonists and not (necessarily) those of its author. Galbraith’s own perspective on the controversies inherent in his subject material – though of potential interest (he being, after all, the current editor of Shooting Times) – is almost entirely withheld.

For In Search of One Last Song is very far from being any kind of polemic. Its ambition (in which it has succeeded) has instead been to assemble a gallery portrait of extraordinary human beings with extraordinary visions – quixotic souls, for the most part, tilting against images of paradise lost.

Up and down the rainy moors of Galloway, farmer Patrick Laurie grazes ten native cattle in a vain endeavour to render the ground even marginally more hospitable to black grouse – but is allowed only ten animals (‘which everyone agrees isn’t even touching the sides’). Over the sea in Skye crofter Cheryl McIntyre painstakingly mows her fields from the outside in to avoid running over nesting corncrakes, but there are only handful left on the whole island and Galbraith leaves her ‘cutting carefully for a bird that isn’t there.’

Against such odds, why carry on the fight? In the answer to that question lies the emotional heart of Galbraith’s journey and of his book.

Sometimes these birds figure as direct links to precious personal histories. ‘Heard it purring in the hedge,’ remembers Graham Denny in Suffolk, thirteen days after his father died, ‘and I just howled and howled. Turtle doves is something I shared with my dad my whole life.’

For others, birds represent a broader heritage. On the south coast, Sam Lee is not just an advocate for nightingales but a musician who works with their material. ‘They taught us so much of our culture,’ he says, ‘and they gave us the rhythms of our lives. They held our stories, they held our narratives, and they held our mythologies.’

The poet Katrina Porteous is more philosophical still. Over raspberry jam and rolls in her Northumberland kitchen, she suggests that birds ‘express things about being human. They are deeply embedded metaphors about our longing, our longing to escape, and our gravity and physicality.’

‘Because they can fly,’ suggests the author, as the poet pauses and closes her eyes, ‘and we can’t.’